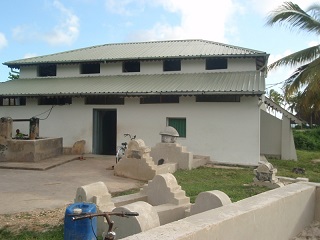 EARLY ARAB RULE
Traders from Arabia (mostly Yemen), the Persian Gulf region of Iran (especially Shiraz), and west India probably visited Zanzibar as early as the 1st century AD. They used the monsoon winds to sail across the Indian Ocean and landed at the sheltered harbour located on the site of present-day Zanzibar Stone Town.
Traders began to settle in small numbers on Zanzibar in the late 11th or 12th century, intermarrying with the indigenous Africans. Eventually a hereditary ruler (known as the Mwenyi Mkuu or Jumbe), emerged among the Hadimu, and a similar ruler, called the Sheha, was set up among the Tumbatu. Mwinyimkuu in Zanzibar with his headquarter in Dunga and Mkame Ndume in Pemba centred at Pujini, assumed supremacy and ruled until the period of invasion by the Portuguese. Neither had much power, but they helped solidify the ethnic identity of their respective peoples
As the bond flourished between islanders both Asian and especially Arabs, Islam was introduced . Islam gradually became the way of life among the islanders. The people lived along the coastal areas where the routes of Arab’s enduring  trade reached.

The Yemenis built the earliest mosque in the southern hemisphere in Kizimkazi (pictured) located at the southern part of the island of Zanzibar, Tanzania and is one of the oldest Islamic buildings on the East African coast built in AH 500, i.e. 1107 AD. 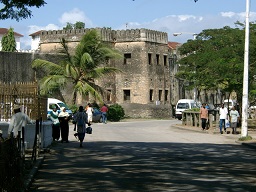 PORTUGUESE RULE
Portuguese invaded and defeated local rulers and took control of almost all the coast of East Africa between 15th and 17th century, Portuguese first conquered Zanzibar (i.e. where Arabs lived) followed by falling of other coastal settlements one by one. However Portuguese short-lived in the coastal area of East Africa as the Omanis annexed Zanzibar and many coastal towns to their empire that was ruled from Muscat later on. In the 18th century, Zanzibar and Pemba were subject to the sultans of Muscat and Oman. In 1832 the Omani sultan Sayyid Said (1787-1856) established his residence on Zanzibar, where he promoted the production of cloves and palm oil and carried on an active slave trade with the interior. His domain, which included parts of the mainland, was a commercial rather than a territorial empire. Although Sayyid Said had full control of Zanzibar Island as early as 1822, Pemba was to a great extent ruled by the Mazruis of Mombasa. He later on controlled the Mazruis and assumed full control of Zanzibar and Pemba islands until the time of his death Later Arab rule. The Old Fort of Zanzibar (pictured) in Forodhani, Stone Town was built in the late 17th century by the Omanis to defend the island from the Portuguese. 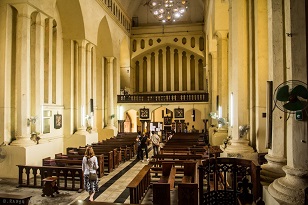 LATER ARAB RULE
In 1698, Zanzibar became part of the overseas holdings of Oman, falling under the control of the Sultan of Oman. The Portuguese were expelled and a lucrative trade in slaves and ivory thrived, along with an expanding plantation economy centring on cloves.
The Arabs established garrisons at Zanzibar, Pemba, and Kilwa. The height of Arab rule came during the reign of Seyyid Said (more fully, Sayyid Said bin Sultan al-Busaid), who in 1840 moved his capital from Muscat in Oman to Stone Town. He established ruling Arab elite and encouraged the development of clove plantations, using the island’s slave labour.
On April 6, 1861, Zanzibar and Oman were divided into two separate principalities. Sayyid Majid bin Said Al-Busaid (1834/5–1870), his sixth son, became the Sultan of Zanzibar, while the third son, Sayyid Thuwaini bin Said al-Said, became the Sultan of Oman.
The Sultan of Zanzibar controlled a substantial portion of the east African coast, known as Zanj, and trading routes extending much further across the continent, as far as Kindu on the Congo River. In November 1886, a German-British border commission established the Zanj as a ten-nautical mile (19 km) wide strip along most of the coast of East Africa, stretching from Cape Delgado (now in Mozambique) to Kipini (now in Kenya), including Mombasa and Dar es Salaam, all offshore islands, and several towns in what is now Somalia. However, from 1887 to 1892, all of these mainland possessions were lost to the colonial powers of the United Kingdom, Germany, and Italy, although some were not formally sold or ceded until the 20th century (Mogadishu to Italy in 1905 and Mombasa to Britain in 1963).
Zanzibar was famous worldwide for its spices and its slaves. It was East Africa’s main slave-trading port, and in the 19th century as many as 50,000 slaves were passing through the slave markets of Zanzibar each year,(David Livingstone estimated that 80,000 Africans died each year before ever reaching the island.) Tippu Tip was the most notorious slaver, under several sultans, and also a trader, plantation owner and governor.

Zanzibar’s spices attracted ships from as far away as the United States, which established a consulate in 1837. The United Kingdom’s early interest in Zanzibar was motivated by both commerce and the determination to end the slave trade. In 1822, the British signed the first of a series of treaties with Sultan Said to curb this trade, but not until 1876 was the sale of slaves finally prohibited. An Anglican church (pictured) was built on the Zanzibar old slave market, located at Mkunazini Street, Zanzibar stone town. 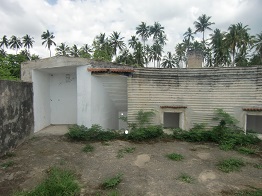 BRITISH AND GERMAN INFLUENCE AND RULE
The British and Germans  coming  to East Africa was the result of Berlin Conference which  divided African continent  among European powers, In 1885, Germany declared that it intended to establish a protectorate, named German East Africa in the area, under the leadership of Carl Peters. When the sultan of Zanzibar objected since he claimed to be ruler on the mainland as well, German warships threatened to bombard his palace. Britain and Germany then agreed to divide the mainland into spheres of influence, and the Sultan was forced to acquiesce and the then Sultan was left with Zanzibar and Pemba. After the defeat of Germany in 1918 in World War 1, German East Africa was divided among the victorious powers under the Treaty of Versailles. So the territory was transferred to British control. “Tanganyika” was adopted by the British as the name for its part of the former German East Africa.
With the signing of the Heligoland-Zanzibar Treaty between the United Kingdom and the German Empire in 1890, Zanzibar itself became a British protectorate. In August 1896, Britain and Zanzibar fought a 38-minute war, the shortest in recorded history, following the death of Sultan Hamad bin Thuwaini. A struggle for succession took place as the Sultan’s cousin Khalid bin Barghash seized power. The British instead wanted Hamoud bin Mohammed to become Sultan, believing that he would be much easier to work with. The British gave Khalid an hour to vacate the Sultan’s palace in Stone Town. Khalid failed to do so and instead assembled an army of 2,800 men to fight the British. The British launched an attack on the palace and other locations around the city after which Khalid retreated and later went into exile. Hamoud was then peacefully installed as Sultan.
British encouraged formation of associations based on ethnic lines, which later on were the foundation for the new political parties. The ethnic based census of 1948 that categorized people into Shirazis, Arabs, Indians, and other African tribes formented ethnic tensions that have plagued Zanzibar ever since. The Arab, Indian, Shirazi and African associations that were formed in the 50s have plunged Zanzibar into political conflicts bigger than its size. During this period, the history of Zanzibar witnessed the formation of political parties all fighting for independence from Britain. The Zanzibar Nationalist Party (ZNP), Afro Shirazi Party (ASP) and the Zanzibar and Pemba Peoples Party (ZPPP) are all products of ethnic associations. For example, the ZNP, which was launched by people considered to have no direct descendant to Arabs, got a support from the Arab Association. The ASP was a merger between the African Association and the Shirazi Association. The ZPPP was an offshoot of ASP as result of disagreement of ASPs too much leniency towards African Association.
The period was marred by dirty politics and party conflicts that led to scores of politicians changing ranks from one party to another. The Umma Party, which was formed by communist members of the ZNP joined ASP in claiming full independence and became an influential partner of ASP in the early days after independence and revolution. During the second world war the British built bunkers (pictured) as a defensive military fortification, these ruins still remain on Zanzibar. 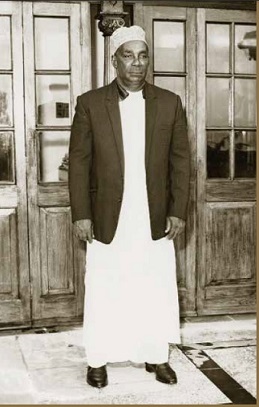 THE INDEPENDENCE AND REVOLUTION
On 10 December 1963, Zanzibar through Zanzibar Nationalist Party (ZNP) received its independence from the United Kingdom as a constitutional monarchy under the Sultan. This state of affairs was short-lived, as the Sultan and the democratically elected government were overthrown on 12 January 1964 in the Zanzibar Revolution led by John Okello, a Ugandan citizen who invaded Zanzibar with British trained Ugandan soldiers from the mainland. Afro-Shiraz Party leader, Sheikh Abeid Amani Karume was named president of the newly created People’s Republic of Zanzibar and Pemba. Several thousand ethnic Arab (5,000-12,000 Zanzibaris of Arabic descent) and Indian civilians were murdered and thousands more detained or expelled, either their property confiscated or destroyed. The revolutionary government nationalized the local operations of the two foreign banks in Zanzibar, Standard Bank and National and Grindlays Bank. These nationalized operations may have provided the foundation for the newly created Peoples Bank of Zanzibar (PBZ still exist today). Jetha Lila, the one locally-owned bank in Zanzibar, closed. It was owned by Indians and although the revolutionary government of Zanzibar urged it to continue functioning, the loss of its customer base as Indians left the island made it impossible to continue. Pictured is The first President of the People’s Republic of Zanzibar, Sheikh Abeid Karume poses for an official portrait at the State House during the early days of the Revolution.

UNION WITH TANGANYIKA TO FORM TANZANIA
On 26 April 1964, the mainland colony of Tanganyika united with Zanzibar to form the United Republic of Tanganyika and Zanzibar; this lengthy name was compressed into a portmanteau, the United Republic of Tanzania, on 29 October 1964. After unification, local affairs were controlled by President Abeid Amani Karume, while foreign affairs were handled by the United Republic in [Dar es Salaam]. Zanzibar remains a semi-autonomous region of Tanzania. Pictured is the Union of equals: President Karume accompanied by President Nyerere inspects the guard of honour as he arrives in Tanganyika on 25 April, 1964 to finalise the merger of the two countries.